Our Developments and Sales Centres are open 10.30am - 5pmSee our developments

Welsh house builder Llanmoor Homes has recently announced that they will be renewing their sponsorship of Ely Valley Football Club.

Llanmoor Homes last year donated £1000 towards the kit of the Under 18s team and this year the family-run business has agreed to sponsor brand new team kit and training tops for the first ever Under 16s team. Ely Valley JFC’s new shirts will now feature Llanmoor’s distinctive logo as a show of gratitude for Llanmoor’s continuing support. 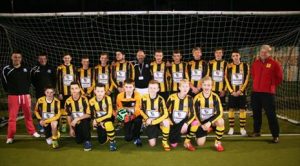 Since Ely Valley FC was founded in 2005 it has gone from strength to strength and now has almost 100 children training and playing regularly. The teams range in age from Under 7s to Under 18s, as well as a senior team who help to coach the younger players.

The Club was set up by local resident Steve Dyer. While looking for a local club for his 9-year-old son, he was told that both the local boys’ and girls’ football clubs in Tonyrefail were full and no longer taking on players. Steve and a group of his friends then decided to train as football coaches, starting their own team.

This year the Club put forward 8 players to the Cardiff City FC Training School and, impressively, 6 of those players were selected for the school.

The team is also benefitting from the new Ely Valley Community Sports Park which opened in Tonyrefail last July and of which Steve Dyer is one of the founding directors. The Sports Park features two state of the art 3G five-a-side pitches which are the first phase of what will eventually become an all-round sports park.

Llanmoor Homes is one of the only remaining large scale, privately owned house builders in South Wales. Established in 1966, Llanmoor Homes is directed from its headquarters in Talbot Green by brothers Simon, Tim & Matthew Grey. The company has an excellent reputation for building high-quality homes with exceptional designs and superior finishes.
Llanmoor launched their nearby development, Padfield Court in Tonyrefail last year. Padfield Court is Llanmoor’s first development in the Tonyrefail area and features 137 detached, semi-detached and link properties of Llanmoor’s most popular designs.

Steve Dyer said: “We are extremely grateful to Llanmoor Homes for their continuing support. We depend entirely on the generosity of volunteers and businesses to be able to run our club. Support from companies such as Llanmoor means that we can continue to give young children the opportunity to play sport in a supportive and fun setting.”

Tim Grey, Sales Director of Llanmoor Homes said: “We have been constructing homes in the Rhonda Cynon Taff for over 48 years and in that time we have provided many employment opportunities and community benefits. As a family-run business we are proud to support the communities in the areas in which we build and are always looking for opportunities such as this where we can help out.

“We are therefore delighted to be able to continue our relationship with Ely Valley FC. Steve does a fantastic job and his hard work and dedication to the club means that it is growing bigger and better each year. The fact that 6 players have now gone on to the Cardiff City FC Training School is a fantastic tribute to Steve and the whole club.”