Welsh house builder Llanmoor Homes has recently donated high-quality topsoil to Rogerstone Rugby Club to support the clubs much-needed renovation of their pitch. Llanmoor recently arranged for 10 twenty tonne loads of topsoil to be transported from their nearby Bethesda Field development to the club.

Rogerstone RFC was founded in 1973 by former pupils of Bassaleg Grammar School but was disbanded in 1996 due to a number of lead players leaving the club to play professional rugby. The club was then reformed in 2005 in consequence to an increase of housing developments in the Rogerstone area which saw demand rise for the rugby club to be re-established.

The club currently has a successful senior team and have recently introduced a junior section for the 2014-2015 season.

Rogerstone RFC’s shirts for the new season will now feature Llanmoor’s distinctive logo as a show of gratitude for providing the much needed topsoil.

Bethesda Field is Llanmoor’s first development in the Newport area and has already garnered interest from early-bird home buyers, with 4 homes already sold. The development will feature 22 of Llanmoor’s popular 3 and 4-bedroom homes. Bethesda Field also sees the unveiling of a brand new house design, the new 3-bedroom ‘Pendoylan’ home.

Llanmoor Homes are based in Talbot Green and run by brothers Tim, Simon and Matthew Grey. The company and has an excellent reputation for building high-quality homes with exceptional designs and superior finishes.

James Williams, Chairman of Rogerstone RFC, said, “We are very grateful to Llanmoor for the donation of the topsoil and our ground refurbishments are now progressing swiftly. We depend on support from companies such as Llanmoor to be able to complete the pitch renovation. Donations such as this ensure the continuation of the senior rugby team and gives the junior team the opportunity to flourish in the new season.” 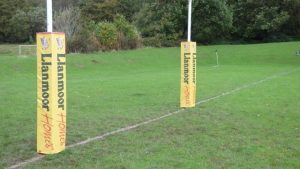 Tim Grey, Sales Director of Llanmoor Homes said, “We are a local business who are very proud of our Welsh roots, and are committed to supporting the communities in the areas surrounding our developments. We were delighted to donate topsoil from Bethesda Field for this very worthy cause and I wish the club all the best for the new season.”