Llanmoor Homes – award-winning across the board

Llanmoor Homes is well known for its status as an award-winning housebuilder, which has helped to establish the family-owned company as one of the leading medium-sized housebuilders in the UK. What many may not know, however, is that every one of Llanmoor&rsquo;s six Site Managers is an award winner.

Dale Dickenson and Mark Thomas have been recognised for two years in a row at the NHBC Pride in the Job Awards in the medium-sized housebuilder category. Pride in the Job is the industry most prestigious awards programme, dedicated to recognising the Site Managers who achieve the highest standards in housebuilding. Both Site Managers were awarded a Seal of Excellence, with Dale going on to win the Regional award, and being shortlisted for the National Supreme Awards.

Dale Dickenson says:&nbsp; &ldquo;I always strive to improve the quality of work on site so it was a huge achievement for me when I received 2 NHBC Regional awards and a commendation letter from our local MP, Owen Smith.

The construction industry is constantly changing, and although it sometimes a struggle, I think it&rsquo;s incredibly important to continue challenging trade standards as a means of achieving excellence. I gain immense job satisfaction knowing that the work I do at Llanmoor contributes towards handing over such a fantastic product to our customers.

Dave Hodges says: When I was awarded with an LABC award for Best Site Manager I was overwhelmed with pride that my work (and that of those on my site) had been recognised by such a well respected body. Although given personally to me, the award was testament to the hard work and dedication put in by the whole company.

Morale is high within the Llanmoor Homes workforce and the Grey brothers take an active interest with regular site visits and interaction with all workers; it&rsquo;s been an honour to be able to win an award on behalf of Llanmoor Homes and to help uphold the company s great reputation within the industry. 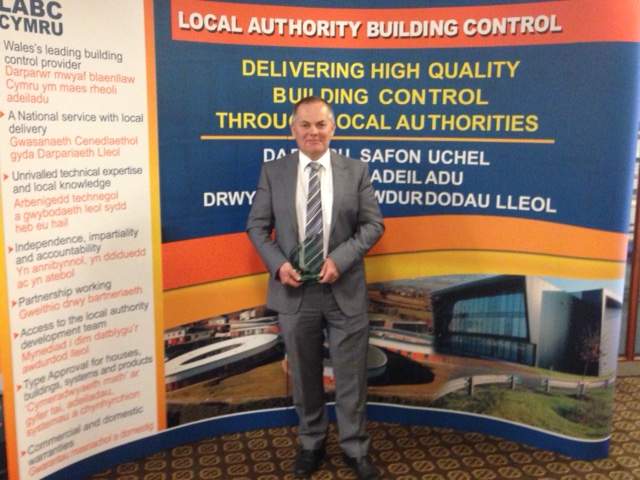 Site Managers who are entered into both the NHBC and LABC awards undergo a rigorous judging process, including several site visits, and only the very best are recognised in the awards. The multiple award-winning status of its Site Managers further underlines Llanmoor&rsquo;s dedication to building quality family homes in Wales.

Simon Grey, Managing Director at Llanmoor Homes, said: Quality is of paramount importance to us at Llanmoor Homes & everything about our developments, from the layouts, to the finishing touches on our houses, are carefully thought-out and completed to the highest standard.

A massive amount of hard work goes into maintaining these standards, and it& s therefore hugely rewarding for our Site Managers and their on-site teams to have that work recognised through these prestigious awards. Crucially for us, this recognition also means that our customers are buying a Llanmoor home with confidence, knowing that they are purchasing a house which has been built to an award-winning standard.